Away from the hotzone called Osh 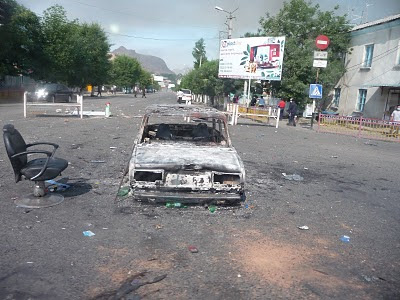 I dreamt my room mate was playing a war game on his computer. Why would he do that in the middle of the night? I woke up and the sound of gunfire remained. It dawned to me the shooting was actually happening outside. Did war break out?

Osh is the second largest city in Kyrgyzstan and is located in the very south of the country on the border of Uzbekistan. Half the population is Uzbek and generally this group run the more successful businesses. The guesthouse were staying in is Uzbek owned. There are different theories about the cause of the violence. In Kygyzstan it is believed it was arranged by the dismissed president Bakijev. Others think the outbreak of violence is caused by the class differences between Kyrgyz and Uzbeks. Unofficial reports claim more than 2000 people have been killed in the clashes. Half a million people fled the country and are cut off from water and food. 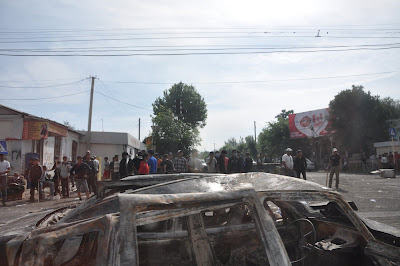 The gunfire kept on going, helicopters flying low over the city and we could see plums of smoke very close from where we stayed. There was even shooting in the street. How on earth are we getting out of here? Luckily myself and a few cyclists had enough food and camping equipment to ensure food for a number of days.

Meanwhile one of our fellow travelers Mike, an American who is married to a Kyrgyz woman, started an evacuation plan. Lot's of calls but no clarity yet. The next morning suddenly a car was arranged and we had to pack quickly and go. In front of our car was another car to escort us out of town. What we saw was worse than we imagined it would be. Many businesses were burned down, cars as well. Groups of young men with guns and improvised spears dominated the street. A dead body. It only took 10 minutes to get us out of town but they were long. There were still some hurdles to take but we got out of the warzone and were on our way to Bishkek where things still remain stable (tomorrow 26 June the referendum will be held).
Posted by Trekking in the Pamirs! at 16:45