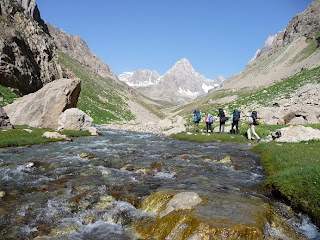 The Pamir Mountains, or Bam-i Dunya (Roof of the World in Persian), is one of the highest mountain ranges in the world. With three peaks well over 7000 metres, the longest glacier on earth outside the North and South Pole (Fedchencko Glacier, 77km), and home to endangered animals like the elusive snow leopard and Marco Polo sheep, this mountain range is still a great unknown.

The Pamirs lie at the heart of Central Asia; with the majority in the autonomous province of Gorno-Badakhshan, Tajikistan. The northern ranges, with Pik Lenin as the highest mountain, are shared with Kyrgyzstan. In the south, the Pamirs come face to face with the Hindu Kush in Afghanistan. Tucked between its more famous neighbouring ranges of the Hindu Kush, Tien Shan and Karakoram, the Pamirs are a little-known wonderland of peaks and glaciers.

During the second half of the 19th century, the Pamir Mountains formed the backdrop for the Great Game – a dangerous play between two super powers, Russia and the British Empire. As the Russians expanded their empire southwards, and British India felt the imminent threat, both parties sent their elite spies to manipulate the local politics and report on the developments of the invisible enemy. In the 1920s, the Russians eventually added most of Central Asia to their newly formed Soviet Republic.

It was not until the fall of the Soviet Union that the Central Asian countries gained independence. Tajikistan was immediately plunged into a bloody civil war that devastated the country, ending in the peace agreement signed in 1997.

The Pamirs are a last frontier for travellers, and one that has long held an attraction for the intrepid. Alexander the Great and his army passed the western part of the mountain range around 330 BC. Marco Polo’s described his journey through the Pamirs in the second half of the 13th century. And despite the current predominance of Sunni and Ismaili Islam in the region, Buddhism found its way here during the 1st century AD, along the network of trading routes known as the ‘silk road’. Tajikistan and its neighbours only opened their borders to foreign travellers at the beginning of the new millennium, and travel here remains an adventure.

With a mountain range so vast and unexplored, a trek through the Pamirs feels like being an explorer yourself. Mountain life has remained the same for centuries. Pamiri and Kyrgyz nomads roam the green fertile pastures (aylaqs) with their herds of yaks, goats or sheep from June to September, which coincides with the trekking season. An encounter will demonstrate the incredible Central Asian hospitality with tea, a meal or staying the night. The absence of roads, power lines and mobile phones creates an end of the world feeling, something that is hard to find these days. A trek in this desolate mountain range can be very challenging; but what you get in return is mountain adventure in its purest form.

Trekking in the Pamirs should not be taken lightly. Unlike trekking destinations such as Nepal and India, there is virtually no infrastructure for trekking in Tajikistan at present. In some areas, community based tourism and ecotourism companies are starting up, but tourism in general is still in its infancy. Facilities for trekking are sparse: food is hard to come by, transport is slow and can be expensive, nobody speaks English, and camping is often the only way of spending the night. Large areas of the Pamirs are uninhabited and the mountain environment (weather and terrain) can be as challenging as a high altitude environment gets.