The first two trekkings in the north of Tajikistan have been completed. We started deep in the Zerafshan Valley in a village called Langar. After a three day approach through rivers and over massive snow fields we went over the Tabaspin Pass (4040m). On the other side we entered the magical, almost mythical river valley of the Yagnob. 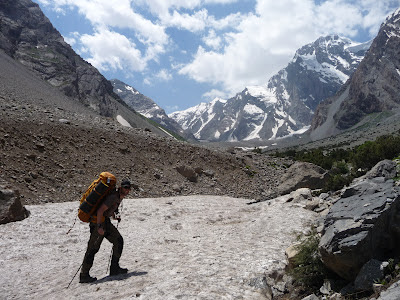 Although there is no permanent habitation in the Upper Yagnob we did encounter several goat herders with their herd of goats. In July there were still enormous snow bridges that allows trekkers to cross the Yagnob. Downstream daytime temperatures started rising (it ws HOT!), and the slopes become more and more bleak. At some point we decided to start at 5am and had a siesta around noon to avoid the heat. After spectacular passages like the gorge below, and some challenging passes we arrived in Magrebi Poyon after 8 days. 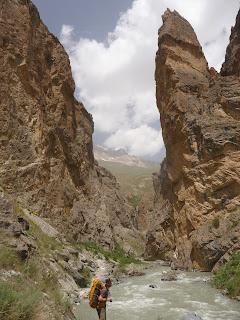 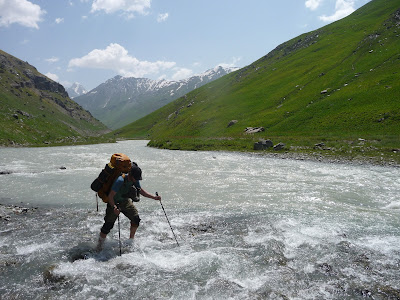 We hitched a ride to Anzob and arranged a taxi to Iskander Kul for about 400 TJK. Another (mad) ride took us to the trailhead for the second leg through the Fan Mountains.Very different landscape, much wetter (we had a little bit of rain, which was very welcome!) and trees. Steep ascends and sections of nice gradual incline brought us in two days to the Upper Akhbashir Valley, where the approach to the Akhbashir (also called Sarymat) Pass starts. 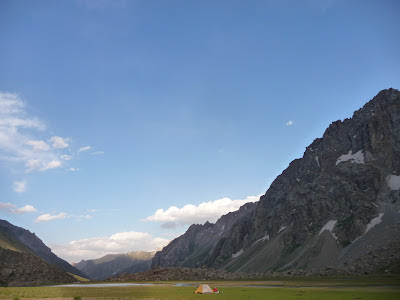 The approach to the 4160m high pass is long. It took us 6,5 of ploughing through wet soil and soft snow to get to the summit. But the view was absolutely worth it! 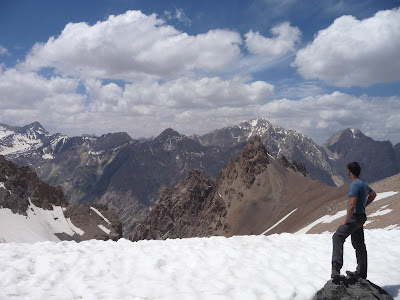 The descent was definitely top three most horrible descents in my trekking "career". Traversing steep scree most of the descent, slushy snow and aggressive shepherd dogs worn us completely out (1300m down on horendous terrain). No path whatsoever. I really wonder why the crossing of this pass is mentioned as an existing route. Not recommended unless you like the kind of terrain described earlier.

In September I will update this and the coming route on this site with proper descriptions and more photographs. Off to the Pamirs in two days!
Posted by Trekking in the Pamirs! at 16:48