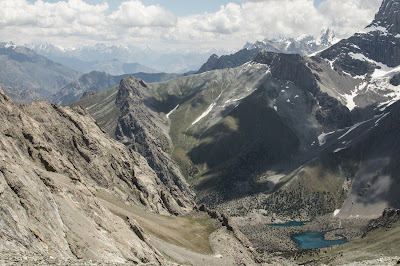 Three years ago I traversed the Fann Mountains with my friend Pete. Now, at the start of the summer 2015 I’m back with our mutual friends, Clare and Jerome. Inspired by the photos we had taken in 2012 Clare decided the Tajik mountains was a good place to celebrate her 50th birthday.

Upon arrival there was something strange going on. Instead of forming a half moon shaped line in the tiny and chaotic arrival hall, we entered a bright lit, shiny and swanky terminal. Was this really Dushanbe Airport? Although it used to be mahem I kind of miss it…

After a day of adjusting to the heat and general acclimatising in Dushanbe we were headed for Penjikent. Umed Ashurov, our host, warned us about road works en route. It may take a bit longer. The first infrastructural hurdle is the infamous Anzob Tunnel. We entered the tunnel and came to a stand still somewhere half way. It didn’t look very promising. Two lorries were unable to pass each other. For one hour nothing happened. Than things started stirring, with workers and a police man agressively trying to demand cars to reverse. Long story short, after 2.5 hours and being high on exhaust fumes, we managed to leave the 5km tunnel. I’m sure this event took at least a year from my life (so if I die at 97 instead of 98 you know why!). There was another less significant hold up as they were welding a bridge over the mighty Zerafshan River (probably a good thing to let them do their job properly). After nine exhausting hours we received a warm welcome at Umed’s family residence in Penjikent. 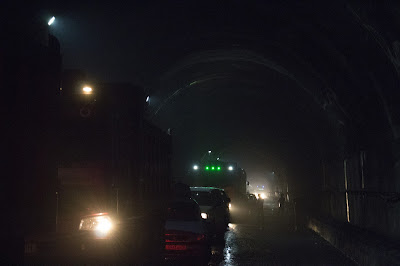 Stuck in the Anzob Tunnel, not the healthiest place on the planet…

We planned a six day trek through the heart of the Fann Mountains, doing the Lakes Loop trek with an extension to Chukurak and finishing at the village of Zimtud. We spent the first night in the rather bombastic Soviet era mountain hut near Artush village. Here we met our entourage, who would spend the next six days with us. Our local guide and translator Dovood appeared to be a very chatty guy. We were all itching to hit the trail. The first stage involved a 700m climb up the biggest lake in the Fann Mountains, Kulikalon. It became painfully clear that some acclimatisation was needed. Though technically easy, the trail is pretty steep at times. After three hours of hard work we reached Kulikalon. The backdrop of the peak named “Maria” (after a Russian female climber who fell of the 1500m high north face) makes this place probably one of the most spectacular camp spots in Central Asia. The first true challenge was scaling the 3780m high Alaudin Pass. The combination altitude, bad stomach and 1000 vertical metres made this climb for Jerome a true ordeal. But he summited and a few tears were shed by seeing the unbelievable blue-green colours of the Alaudin Lakes. Down hill might have been even tougher than uphill. Steep scree battered the knees and mental energy. The intimidating echoes of the thunder storm made us duck for cover every time. Knackered we entered our camp on the shores of Alaudin Lake. 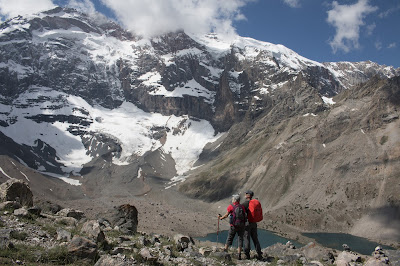 The third day was meant to be a resting day. But we found this beautiful objective, visible from the west shore of Alaudin Lake. On the north face of Chapdara mountain we could see a massive hanging glacier glued on the vertical wall. I had been there in 2010 and knew you could get really close to it. So off we went, struggling up this steep grassy slope. The terrain changed to scree and as we approached the snout of the glacier we had to climb up the moraines. Hard work but absolutely worth the effort. On our way back we managed to squeeze in a little bouldering session. The juniper forest around Alaudin almost looks like a bonzai garden. Very surreal. At day four we were heading back into western direction, trying to tackle the 3680m high Laudan Pass. After the Russian climbing camp we found the trail zigzagging up through the juniper forest. Above the tree line we were yet treated by a friendly looking landscape. The mountains here had a green, lush carpet of grass. 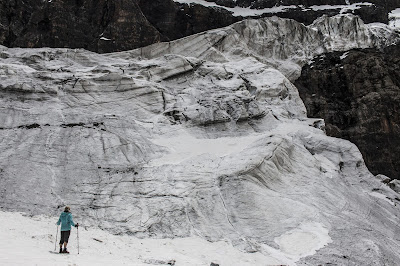 Clare at the snout of the tumbling glacier off Chapdara Mountain

After a false summit, Laudan Pass was finally visible. After two days we were descending back to Kulikalon, this time we planned to camp on the other side towards the Zierat Pass. We found a green little island in Kulikalon with a small stone causeway leading to it. Just as we had set up the tent it started pissing down with rain. This was basically the story every day. But somehow we managed to dodge the at times heavy showers by finding a cave or setting up camp in the nick of time. The Zierat Pass looked a bit daunting with no obvious trail and its steep slopes. From all the passes this was probably, at least psychologically, the toughest. Steep and monotonous. The other side is more interesting with a shallow green lake (Zierat Lake) and down to the fantastic Chukurak Lake. The latter is actually just 30 minutes up from the Alplager mountain hut. The hard way is better though! 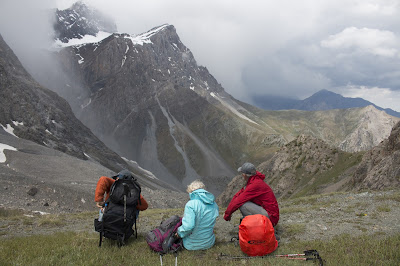 Unfortunately it was Clare's turn for violent sickness. With just one day to go it became unsure whether we could complete the trek to Zimtud. The 6th and last day we gave it a go, Jerome and I by foot and Clare on a donkey. Although she was still feeling weak and ill we managed to reach Zimtud, via the village Guitan where we were invited for a generous lunch by our donkey manager Hikmet. 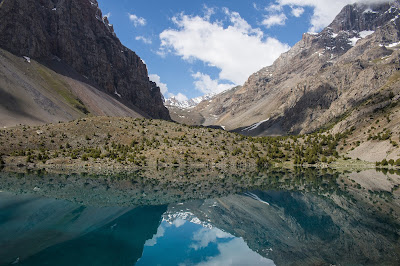 Alaudin Lake
Posted by Trekking in the Pamirs! at 23:12