After getting out of Khorog we hit the Pamir Highway to Bachor (3300m), a small mountain village 120km east of Khorog. This is the trailhead to many mountain adventures in the High Pamirs, including Yashilkul. The last 18km is, as understated by our driver, a bad road. It took two hours to reach the place. As there was enough time to do a bit of walking we set out to the east to stretch the legs and find a good camp spot which we did roughly 5km east at the confluence of Ghund and an unnamed side river (3425m). 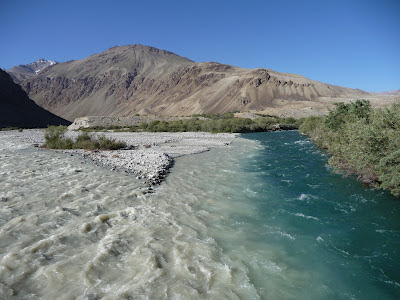 
﻿We stayed on the trail leading to the beautiful mountain lake Yashilkul Kul, only into the left river valley just before the lake. The hot temperatures and thin air (and hauling everything ourselves...) made it a tough trekking day. Remco was not very well acclimatised yet and that took its toll. We decided to set up camp after 5 hours of walking, along the stream coming from the lake Chapdar at around 3600m. Plenty of dead wood and dried cow dung enabled us to make a good bon fire. 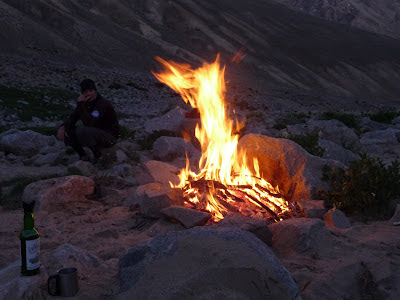 ﻿A good whisky and roaring fire, what else do you need?

The easy path ascends gradually through the wide valley. Navigation is easy, the weather ever clear and temperatures mild in daytime and slightly chilly at night. The horse flies are an absolute pain, hasseling you from 9 to 5! The next camp we set at the valley looking towards where Chapdar would be. It was our first night above 4000m and getting to sleep proved to be difficult. 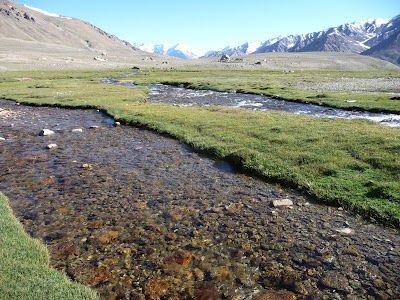 The route over the Langar Pass (4625m) is again easy. From our camp to the pass took us about three hours. A few hundred metres after the pass you´ll see a stunning translucent mountain lake which we first mistook for Chapdar. We used Marhus Hausers The Pamirs map which is scale 1:500.000. It is very easy to misjudge distances! We set up camp at the lake and I went for an excursion to Chapdar, 3km southwest of our camp. Next stop Uchkul, a 4 hour walk and again a stunning location to pitch the tent. The choi and the warm fresh naan at the shepherds family at the second lake was briliant (and very welcome after days of freezedried food and muesli breakfasts!). 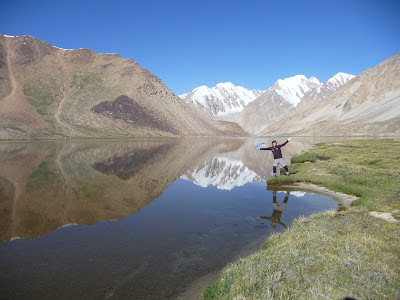 From Uchkul a trail descends towards a shepherds camp at a river that flows down to Sarez Lake. Here I made a crucial mistake of assuming a route without even checking the map. Instead of crossing the river before the first small lake I kept going up. This resulted in lot's of doubts about the map and the route. When I realised I made a mistake we were far up this wrong valley (in fact almost back at Chapdar...). Remco was not impressed. It took another two hours to get back on route and find a suitable camp spot. It left us drained, both physically and mentally. Nevertheless, we pitched the tent at a marvelous mountain lake. 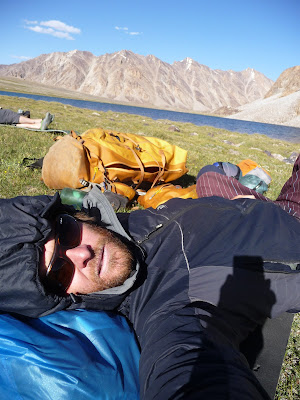 ﻿Knackered after a unwanted D-tour
﻿
﻿The 6th day went through stunning high alpine terrain. The path remained surprisingly, winding its way through big boulders and along steep drops. In terms of mountain lakes, this is probably one of the most beautiful routes in the world. Crystal clear waters surrounded by massive glaciated 5000m peaks. We passed Zarojkul after 3 hours of walking. Still a long way to go, we kept going (wanting to sleep below 4000m to catch a bit of sleep for a change). Our journey back south in the direction of Bachor was not as easy as it seemed. Again longer than expected because of the scale of our map and hopping many boulders with over 20kg on our backs took its toll. Remco tried to recover from a slip but instead did his back in badly. The journey down the next day was, despite the easy terrain, a true agonising experience for him. We decided to head back to Khorog to reconsider our plans. In Khorog plans were decided for us as it turned out... (see previous post) 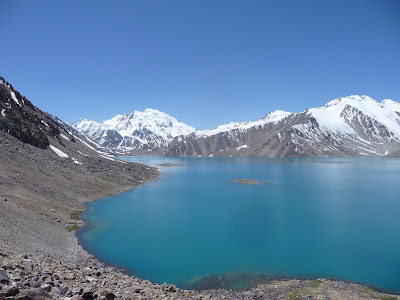 Shortly I will write a detailed description of this trek.
Posted by Trekking in the Pamirs! at 19:00