The 24th of July Remco and I hopped in a jeep bound for Khorog, the capital of the Pamir region. Apart from the usual delays at the check points, the trip seemed to run smoothly. Until news arrived that there was a 'situation' in Khorog, involving violence with casualties. Stories along the road made clear that extreme violence broke out in Khorog between the government military and a local group and that 40 deaths were reported. 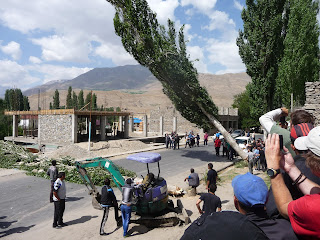 I couldn't believe it, Khorog is such a peaceful city, with all its hospitality and relaxed atmosphere. We planned the start of our Pamir crossing in Vanj, but without knowing exactly what was going on we decided to travel further and make a decision later what to do. Hindsight, we should have gotten off earlier. But we felt we had to get information before heading into a possible hazardous mountain territory. We ended up in a Khorog guesthouse, advised to stay in. Seeing groups of foreigners leaving the centre in the hope to catch a ride near the airport we decided to pack our bags and leave again. Only to return again a few hours later, spending the night in Khorog. Gun shots and heavy artilliry kept us awake and worried about the next day. Malte, a German fellow traveler, managed to arrange a car for the next day heading eastwards to a mountain village called Bachor. We managed to get there and did a fantastic 7 day trek in the area (see next post).

Returning to Khorog (virtually all traffic through the Pamirs passes Khorog) was again insecure. Still recovering from the high altitude trek we were woken up by the Tajik security service GKNB with the request to leave Badakhshan as soon as possible. Three hours later we took off from Khorog airport on our way to Dushanbe.... 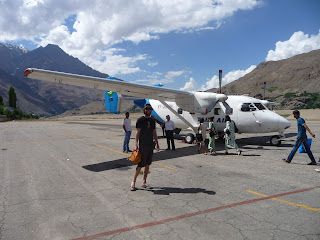 The crossing of the Pamirs unfortunately never happened. But more important is that peace returns to the region.

For more background information and travel advice there's an excellent piece on Robert Middleton's website pamirs.org.
Posted by Trekking in the Pamirs! at 16:07